I’d like to start this post by saying hello! I’m Lucas and I am a newer dog trainer at Canine Peace of Mind.

Today I’ll be talking about my experiences at my first dog training seminar, the Larry Krohn, Jay Jack and Joel Silverman Seminar / Workshop.

To be honest, I was pretty nervous because I had a working spot with Jay Jack who was one of the three trainers leading the event. Jay is an amazing trainer that utilizes a lot of play when working with dogs. I was especially interested in working with him because I really enjoy a good game of tug with my dog, Mango. 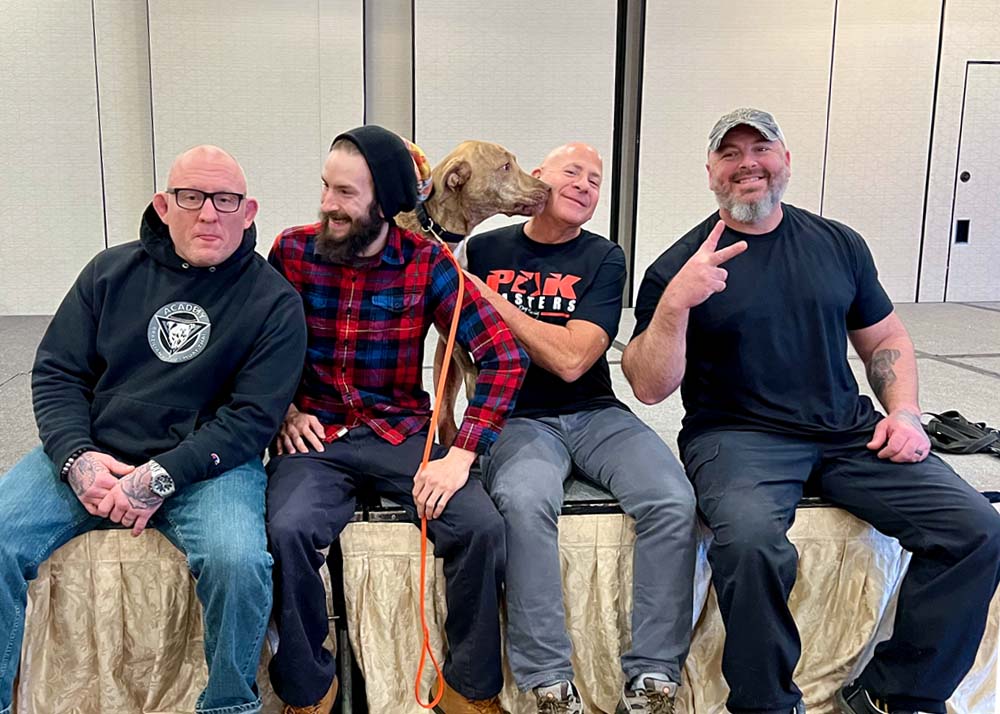 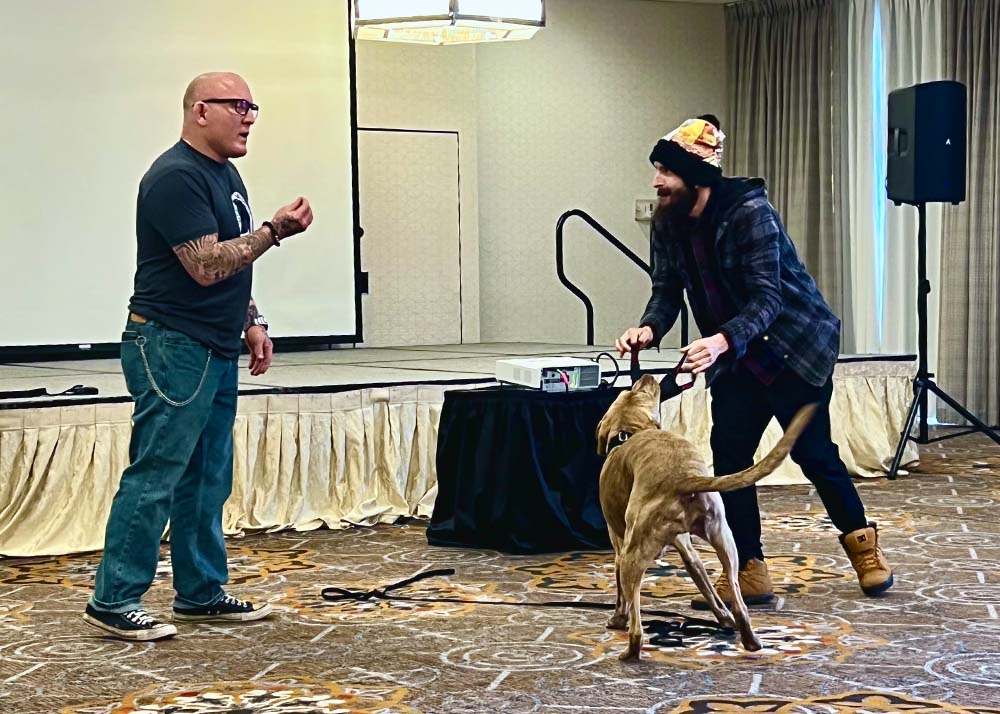 Walking in on the first day at 8:30am with Mango, I was equal parts nervous and excited to be there. There were dozens of dogs with all different temperaments and personalities. This was a true test of all the work I’ve done with Mango thus far. It didn’t take long for my nervousness to quickly change to excitement.

Mango did amazing while we sat in our seats and got ready for the seminar to begin. I was eager to learn, and expand my knowledge and experience with dog training. As I eagerly waited for my turn to work, I watched people work with the other trainers there.

My Working Session with Jay Jack and Mango

After watching both Joel and Larry present and work with different dogs, it was time to watch Jay present. He worked with a couple trainers and their dogs, and then he called for anyone else that had a working spot with him. My mentor, Kendra, who just happened to be the one to bring me to the seminar, back hands me lightly on the shoulder and motions for me to get up there. It was time. Center stage and all eyes on me.

To be honest, I’ve never liked being the focus of attention. As I’m walking up, my legs start to weaken, I start sweating a little bit, but I’m also excited. This is my turn to learn from this legend of a trainer and for Mango and I to show what we’ve got. Jay looks at me and says, ”play with you dog.”

Mango and I start to play a game of tug, and we get into a pretty good session. After a few minutes or so, he tells me to stop. Then he proceeded to tell me all the stuff that I need to work on when playing with my dog. It was very humbling and good to hear, but man oh man was my face red as everything I did was being broken down. This is what I came down to this seminar for. 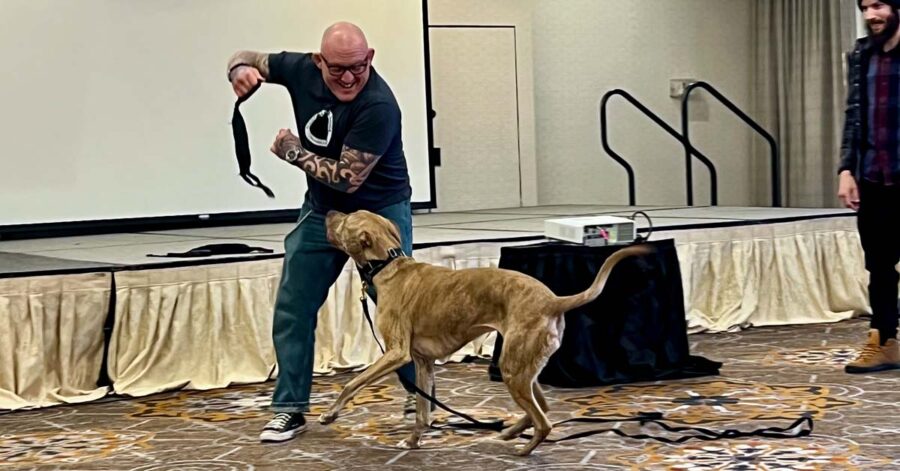 “The big takeaway for me was that the side to side jerking movements I was doing during tug could damage the vertebrae in her neck. Jay showed me how to play tug safely with her and how to move the toy so I would not cause any harm.``

I learned so much from that 30 – 40min session with Jay. The big takeaway for me was that the side to side jerking movements I was doing during tug could damage the vertebrae in her neck. Jay showed me how to play tug safely with her and how to move the toy so I would not cause any harm. I also learned how to make the game more interesting, which would keep her more engaged and overall more fun for both of us.

I’ve always thought the game tug was about a strength match with your dog, but that gets boring for them and tiring for you. When tug is played as a strategic game, it will strengthen the relationship you have with your dog. By watching and learning from Jay, I learned how to strategize during the game of tug with a dog, which makes it more fun for the dog and more of a competition.

Instead of using just the toy, you want to use yourself and your environment to see if you can get the dog to fumble the tug toy, giving you a win. This can be done by covering their eyes, patting their cheeks or shoulders, throwing a blanket or towel over their head, anything to throw them off.

Even picking up a chair and seeing if they’ll climb it to grab the toy. You want to be just as invested in getting the toy as they are. By doing so, you create more competition and drive, making the game more bonding and enjoyable. 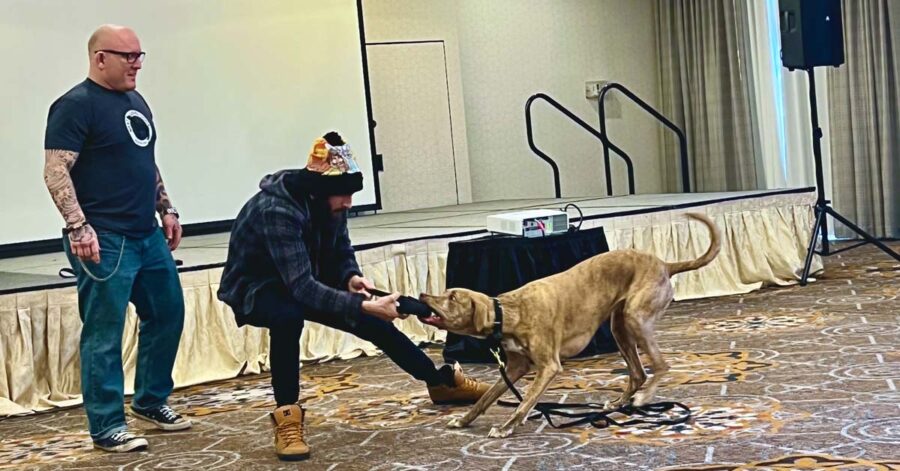 “For any dog trainer just starting out, it’s important to keep an open mind and be willing to learn new skills and training techniques to expand their skill set with dog training.``

My First Dog Training Seminar Was Nothing Short of Amazing

The whole weekend was nothing short of amazing. The knowledge, experiences and training techniques I gained are invaluable. My dog training ability has improved significantly.

As a newish dog trainer, this experience was incredibly enlightening for me. I was able to meet so many different trainers that were there. Everyone was so supportive, even giving me tips and tricks during “free play” and complementing the relationship I have with my dog.

Getting words of encouragement from trainers with many more years of experience was so validating, especially as a dog trainer just starting out. I was so worried that my dog would misbehave or embarrass me and she was a total rockstar.

I do want to take a moment to thank my mentor, Kendra, for taking me to the seminar. She is a great teacher and has been invaluable to me as a young dog trainer. The techniques and training skills she has taught me over the last year will stick with me for a lifetime.

I’ve only just scratched the surface and am ready and eager to dive deeper into the dog training world.

Going to the seminar only fueled the fire to work with dogs. My world was expanded and my mind was blown over the weekend. For any dog trainer just starting out, it’s important to keep an open mind and be willing to learn new skills and training techniques to expand their skill set with dog training.

Now, a few weeks after the seminar, I can already tell I’ve made major strides and improvements in dog training. The relationship between Mango and I has grown as well with implementing what I learned from Jay at the seminar. Now that I’ve had a taste of the dog training world, I’m itching to learn more.

This seminar is only the beginning for me. I’ve learned so much, but at the same time so little. I can never know it all or have it all figured out and that’s fine. I don’t want to ever close my mind and think I know everything about dog training, or about anything really.

It’s imperative to keep an open mind, especially in dog training, so that way you are always growing as a dog trainer and as a person.

Read More: Getting Your Dog to Behave in Public

Safely Introduce Your Dog to a Newborn Baby
June 8, 2022

Socializing a Puppy with People… By Ignoring Them
April 10, 2022

Getting Your Dog to Behave in Public
April 1, 2022